The Dark Side of the Island by Jack Higgins, 1963

Yet another review of a novel by my favourite author, for Friday’s Forgotten Books at Patti Abbott's blog Pattinase.

The Dark Side of the Island is one of the earliest and lesser-known novels of Jack Higgins (Harry Patterson). It ranks amongst the best of his early output out of a total of some eighty novels, starting with Sad Wind from the Sea in 1959 and culminating with The Eagle Has Landed in 1975, which built his formidable reputation as a thriller and espionage writer.

Since then, Higgins has produced over forty novels, and from the ones I have read, none are nearly as good as his early fiction.

At just a little over 150 pages, The Dark Side of the Island is set towards the close of World War II and many years after. It has some of the hallmarks of a Jack Higgins novel—a tough and battle hardened hero with a conscience, an idyllic setting torn apart by war, an anti-German resistance movement, a beautiful woman with trust in her heart and courage in her soul and, of course, betrayal which is what the story is about.

Captain Hugh Lomax returns to Kyros seventeen years after he came to the picturesque Greek Island to destroy a Nazi stronghold—a strategic radar station—in a secret British Intelligence operation. The reason for his sudden return eludes him but he knows something terrible happened after the successful operation and although he was caught by the Germans, he managed to escape and spend the peacetime years in England and later in California where he worked as a scriptwriter and a novelist of sorts. Now he is back to find out what happened on the island that night more than a decade ago.

The novel is built into three sections, present, past, and present—‘The Long Return,’ when Lomax comes back after the war and is shocked to find that the locals, including old friends from the Resistance, have turned so hostile as to want him dead; ‘The Nightcomer,’ a flashback, where we get a glimpse of the secret operation and what happened after; and ‘A Sound of Hunting,’ which aptly begins with the chapter ‘One Should Never Return to Anything,’ and where Lomax finally discovers the horrible truth—a friend who betrayed the locals to the Germans and condemned them to hell, and who ensured Lomax took the blame for it. 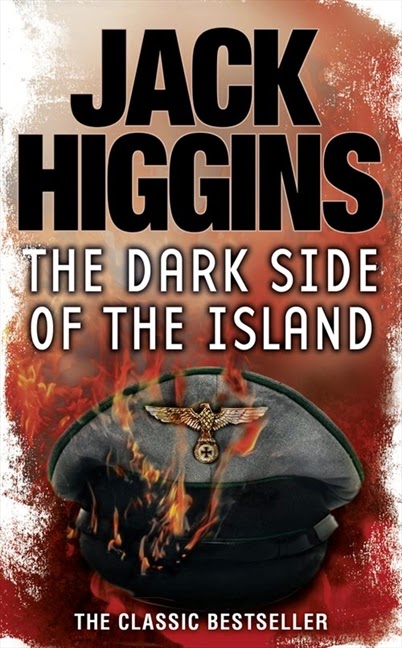 Final word
The Dark Side of the Island is a well-written mystery of sorts that begins during the war and ends years later. The trust and betrayal aspects are done well as the very people Lomax befriended and worked with during the war are now out to kill him. His bewilderment at the hateful reception he gets upon his return is convincing. Like many of Higgins’ protagonists, Lomax has two faces: he is mild, caring, and conscientious on one hand and bitter, tough, and ruthless on the other, depending on who he is dealing with. The story moves at a quick pace and there is good suspense and action towards the end. Any Jack Higgins fan will enjoy this novel.

On another note, it was interesting to see two chapters in the third part of the book, ‘A Sound of Hunting,’ were titles of books he wrote later, namely A Fine Night for Dying (1969) and Confessional (1985).

Also, the young German commanding officer in charge of Kyros island is one Colonel Steiner who, I'd like to think, is the same Steiner who plays a more critical role in the plot to kidnap Churchill in The Eagle Has Landed (1975). Michael Caine played the role in the 1976 film version directed by John Sturges. I must hasten to add, however, that Steiner has a nominal part in The Dark Side of the Island and dies in the end, or so we are told.


Note: Ben Boulden, who reviews a variety of books including thrillers, mysteries, and sf, wrote a fine review of this novel over at his blog Gravetapping, April 8, 2014.
Written by Prashant C. Trikannad at 06:34:00