The Beast is my contribution to Tuesday’s Overlooked/Forgotten films and television over at Todd Mason’s blog Sweet Freedom. Don't forget to check out the other fascinating reviews over there.

Konstantin Koverchenko (Jason Patric) to Daskal (George Dzundza), his commander: “Sorry, sir. Not much of a war. No Stalingrad. How is it that we're the Nazis this time? How is it? I tried to be a good soldier. But you can't be a good soldier in a rotten war, sir. Now I want you to live to see them win. Go...I said go!” 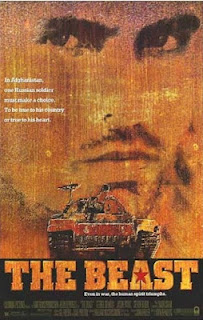 The Beast, or The Beast of War, is a compelling film based on the Soviet invasion of Afghanistan.

The film, directed by Kevin Reynolds, who made Red Dawn, Robin Hood: Prince of Thieves, Waterworld and The Count of Monte Cristo, tells the story of a feisty band of mujahideen (Islamic insurgents engaged in jihad or holy war) who set out to blow up a Soviet T-55 tank that has lost its way in the desert terrain after destroying an Afghan village.

Khan Taj (Steven Bauer), whose family is wiped out in the attack, swears vengeance and, accompanied by a handful of mujahideen fighters, goes after the menacing tank — the beast — with a mad zeal and rocket-propelled grenades that are no match for the armoured vehicle and its powerful guns.

Commanding the tank is Daskal (George Dzundza), a cold-blooded Russian officer, who drives the tank and its crew on a suicide mission against the rebels in one of the most hostile terrains in the world. Daskal is proud and ruthless and puts his tank’s interests before that of his soldiers in his battle against the insurgents.

The cat-and-mouse game between the Russians and the mujahideen, led by the turbaned Khan and played out in the treacherous mountains of Afghanistan, runs through much of the nearly two-hour long film. Assisting the Khan and his men is Konstantin Koverchenko (Jason Patric), the tank driver, who gets on the wrong side of his commander, on matters of principle, and is left to die in the scorching desert. The bespectacled Koverchenko is stoned by Afghan women out to seek revenge against the invaders but is saved in the nick of time by Khan. 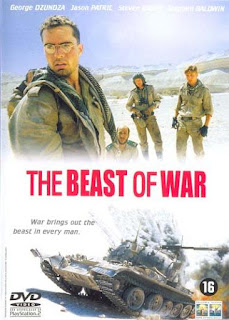 The Khan’s noble deed of rescuing the Russian soldier is an allusion to the famed principles of Pashtunwali, the Afghan people’s code of honour that, among other things, includes nanawatai which means giving sanctuary even to the enemy.

The Russian soldier is torn between his loyalty to his country and his desire to help the Afghan people in a war he knows isn’t right. He chooses the latter. Khan and Koverchenko strike up a friendship and the verbal communication between the two battle-hardened men is what makes this film quite entertaining. Koverchenko teaches Khan how to use the RPG with deadly effect.

The Beast, released in September 1988, five months after Mikhail Gorbachev ordered his troops out of Afghanistan, is a low-budget film with (pardon me) a second-rung of decent actors which, apart from Jason Patric, include Stephen Baldwin who plays one of the tank’s soldiers and Steven Bauer who is convincing as the Pashto-speaking mujahideen leader.

I liked this film because it is, in many ways, a Cold War film, and because of its realistic portrayal of Afghanistan, its hostile land under a merciless sun, and the courage of a people who desperately want their freedom back. There is plenty of action as the T-55 and the mujahideen play hide and seek in the "dust bowls" of the mountain country.
Written by Prashant C. Trikannad at 05:41:00