The search for Georges Simenon

“Writing is not a profession but a vocation of unhappiness. I don’t think an artist can ever be happy.”
— Georges Simenon in an interview to The Paris Review, The Art of Fiction No.9, Summer 1955

Patti Abbott has thrown a mean challenge for this week’s edition of Friday’s Forgotten Books — Georges Simenon and his work — over at her blog Pattinase. So pardon me if this post reads like an author review.

Weeks after the announcement, I have drawn a complete blank on the renowned Belgian author of 220 novels that include 86 featuring his most famous character, Parisian police detective Jules Maigret, who has been described as the Sherlock Holmes of France, and about 200 novellas under all kinds of pseudonyms.

Simenon smoked a pipe, so did Maigret, whom he described thus, "His build was plebeian. He was enormous and bony. Hard muscles stood out beneath his jacket… Above all, he had his very own way of planting himself in a spot... He was a solid block and everything had to break against it." For the uninitiated like this blogger, that is a vivid description of Maigret.

Simenon was a prolific writer who authored some half-a-dozen novels a year though, it is said, he was capable of producing much more. He wrote his first novel at the age of 18.

This FFB seemed like a good opportunity to acquaint myself with Jules Maigret or at least with some of the non-Maigret novels which, I read somewhere online, have been reprinted. I don’t know how far that is true.

Now Simenon is not the kind of author whose novels you’ll find easily in India unless you borrow them from a friend, a discerning reader, or from a library. So, in a frantic effort to locate at least one of his 200-odd novels before Friday the 20th, I contacted the two secondhand bookstores I frequent but neither of the booksellers had even heard of him — “Georg who?” I don’t blame them: while I have heard and read about Simenon, I have never read anything by him. I then got in touch with two reliable new bookstores and their response was identical — “Georges Simenon? Sorry, out of stock. Would you like us to order any of his books?” 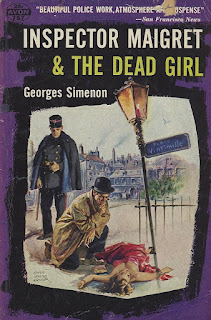 Simenon’s novels are still under copyright and, I suspect, they are going to be tied up in legal knots for a long time. Giving him good company will be Margaret Millar whose books are as elusive as the God Particle. No, they found that one at least, didn’t they?

When you have no choice, you do the predictable thing: you read what others have written about Simenon and his work or what the author himself has said over the years, which isn’t much.

Strand Magazine profiled Georges Simenon’s hero in a lengthy article titled ‘The Great Detectives: Maigret’ by Peter Haining. You can read it here. It is one of the better articles on Inspector Maigret.

Likewise, The New York Times paid a fine tribute to the author following his death in September 1989. You can read that piece titled ‘Georges Simenon Dies at 86; Creator of Inspector Maigret’ right here.

The two articles provide an excellent insight into the master storyteller’s life and his fiction.

Simenon’s fiction has received heaps of praise. As American playwright and novelist Thornton Wilder observed, “The gift of narration is the rarest of all gifts in the 20th century. Georges Simenon has that to the tips of his fingers.”

Wilder’s remark must be seen in the context of Simenon’s own views on writing fiction and on the way he likes to write fiction, which is keeping it simple. “I have always tried to write in a simple way, using down-to-earth and not abstract words,” he says. I don’t know when he said this but in 1955 he told The Paris Review, “Adjectives, adverbs, and every word which is there just to make an effect. Every sentence which is there just for the sentence. You know, you have a beautiful sentence — cut it. Every time I find such a thing in one of my novels it is to be cut.”

It is possible Simenon may have been influenced by Hemingway’s plain and uncomplicated narrative style.


Can you write without the use of adjectives and adverbs? I knocked off a few over the course of a fourth revision of this post and I am quite satisfied with the result. Now if only I had read just one of Georges Simenon’s novels, I could have added substance to this piece as well.
Written by Prashant C. Trikannad at 11:39:00