A Prayer for the Dying by Jack Higgins is my contribution to this Friday’s Forgotten Books edition over at Patti Abbott’s blog Pattinase and Todd Mason's blog Sweet Freedom. Don’t forget to read the fine mix of reviews of forgotten books by other bloggers over there.

What took place then was like something out of a nightmare, frozen in time, no reality to it at all. As the man in the dark overcoat glanced up, the priest produced an automatic with a long black silencer on the end. There was a dull thud as he fired. Fragments of bone and brain sprayed out from the rear of the victim’s skull as he was slammed back against the gravel. 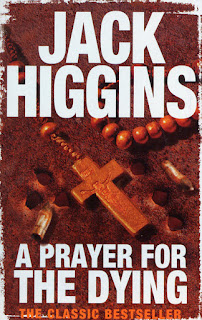 Father Michael da Costa witnesses Martin Fallon kill gangster Janos Krasko, kneeling before his mother’s grave, in cold blood. The ex-IRA bomber, disguised as a priest, looks up and aims the deadly Czech Ceska at Father da Costa but doesn’t fire. Instead, he lowers the gun, turns around and quietly walks out of the cemetery.

Fallon doesn’t kill the innocent even though he once murdered for a cause and is now on the run from his former associates in the Irish Republican Army, British Military Intelligence, and Special Branch.

With nowhere to run, Fallon reluctantly accepts the contract from Jack Meehan, whose respectable funeral business is a front for drug-pushing, prostitution, gambling and protection, to bump off his hated rival, Krasko. The contract killing is Fallon’s route to freedom, with some hard cash and a passport to Australia.

But, before he goes away, Fallon does something unusual for a hired assassin: he makes a confession in Father da Costa’s rundown church, because “the secrets of the confessional are inviolate.”

Father da Costa, who was imprisoned and tortured by the Chinese during the war, is a man of honour and swears by Fallon's confession even as an exasperated Detective-Superintendent Nick Miller, head of the CID, threatens legal action that will force the priest to speak out as a witness.

Miller has been on Jack Meehan’s tail for years but hasn’t been able to nail the gangster for lack of evidence. He is convinced of Meehan’s role in Krasko’s public murder and sees an opportunity to bring the undertaker to justice.

The very evil Meehan orders Fallon to kill the priest but the gunman refuses, saying he has taken care of the matter. The crook, who hammers nails into the palms of his own men as punishment every time they fail him, decides to get rid of both Fallon and Father da Costa.

With Fallon still around, that’s easier said than done.

Irishman Martin Fallon is one of several popular fictional characters created by Harry Patterson who widely wrote as Jack Higgins. Two others, Paul Chavasse, who works undercover for The Bureau, a secret arm of British Intelligence, and Sean Dillon, ex-IRA turned hired mercenary, figure in many of his novels. There is, of course, the charming Liam Devlin, the Irish patriot with a poetic touch, and the hero of his best-known work The Eagle Has Landed. In fact, nearly all of Higgins’ quiet, brooding and intelligent heroes are assassins with a big heart. They stick around to protect those who become unintentional victims in their sinister games, are often gifted, poetically and musically, and are hopeless romantics.

A priest and his church and vulnerable women are a given in many of Higgins' novels. For instance, in A Prayer for the Dying, Father da Costa has a niece called Anna, a blind girl who is rather lovely. Though Higgins doesn't say so outright, she is “one of those plain faces that for some strange reason you found yourself looking at twice,” as Fallon muses. There's also another young woman called Jenny Fox who is forced into prostitution by Meehan to keep his clients happy. She must now "take care" of Fallon but the IRA gunman gently turns down her overtures as he is too old for her and because he is a "walking corpse," a common refrain among all the heroes who often address the women with a "girl dear" and a gentle caress of the cheeks. The girls, inevitably, fall for the men though that's not how it usually ends.

Higgins is also big on religion with battle-scarred priests, who, having taken lives during the war, take to healing souls in the church. It's probably an Irish thing but the Catholic priests often dish out advice to other Catholics, good men and bad men like Fallon and Meehan, in a vain bid to reform them to the ways of God.

So, when you read a Jack Higgins novel, be prepared to be affected by the Stockholm syndrome. There is no hostage situation but you’d rather be standing beside his hero than in front of him, looking down the barrel of his Browning or Walther PPK. I strongly recommend all his novels. 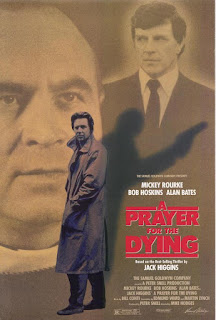 Many of Jack Higgins’ novels have been made into films including A Prayer for the Dying starring Mickey Rourke as Martin Fallon, in the 1987 film directed by Mike Hodges. It also stars Bob Hoskins as Father da Costa, Sammi Davis as Anna, and Alan Bates as Jack Meehan.

My earlier reviews of novels by
Jack Higgins:
A Fine Night for Dying &
The Keys of Hell,
both Paul Chavasse  stories.
Written by Prashant C. Trikannad at 04:24:00