One novel, one film, one comic 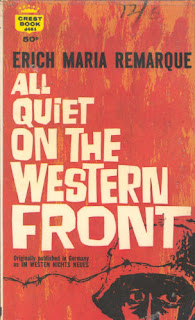 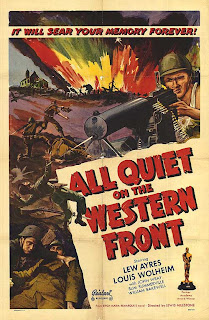 All Quiet on the Western Front is one novel, film and comic-book I'd like to read, watch and read. The title suddenly sprang up today while I was looking for some images on the internet. I haven't read the book by Erich Maria Remarque, a German veteran of World War I, which is what the story is all about. Neither have I seen the black-and-white film directed by Lewis Milestone and starring Lew Ayres, Louis Wolheim, John Wray and Arnold Lucy, all new to me. Classics Illustrated did a fine job of bringing it out in comic-book which I read many years ago, though, unfortunately, it's not a part of my small collection of CI.

According to an interesting Study Guide by The Glencoe Literature Library, "In 1933, All Quiet on the Western Front was one of the first books that the Nazis burned in public, declaring it a 'betrayal of the soldiers of the First World War'. The successful American film of the novel, made in 1930, was also banned by the Nazis. Had Remarque remained in Germany, he would have faced certain persecution. The Nazi government later revoked his German citizenship in 1938."

At this point of time there's very little I can say about All Quiet on the Western Front except that I've been told it is one of the greatest war movies on the Great War. You might have difficulty acquiring the rare comic-book but not the ebook or the film, the former is freely available online. 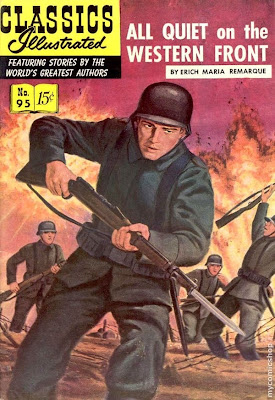